Month 9 – Did you say that we’re almost ready to launch ?

Hello everyone, remember me ? I’m the guy who was writing about how I built an app in 9 weeks !

It’s been some time since I wrote about my adventures in app development and a lot has happened since January. I’ve been on a roller coaster of a journey and those of you who know me will know how frustrating this journey has been. But now we have some light at the end of this tunnel – we have found a solution and we are getting ready to launch !

We are NEARLY there…. finally!

The last time we spoke, I gave an update of how we were facing issue after issue. Whilst they were small issues, all of them on top of each other was very overwhelming. And then came the big whammy – Facebook announced they were changing their development policies. (#$!@#$!@#%). Whilst the policy change was useful to the broad 1 billion Facebook users, the policy change locked down some features that the app was trying to use. So in the past few months we’ve spent a lot of time, lots of sleepless nights (and lets face it, you all know me – lots of chocolate & wine) to figure out how to get around these policy restrictions. What it did mean was that I had to abandon the original solution. Because I’m stubborn (cough, I mean dedicated and committed) this was very heartbreaking.

After some time, enough was enough and I went back to the drawing board. But first, I needed to get clarity on why I was making this and what the purpose of the app was. Not surprisingly after living and breathing this for so long, this purpose was not evidently clear. What was very clear was that I had lost focus. Straight away, I knew that I was not making any clear decisions about this project. So after some reflection, I went back to very beginning and re-read some of my earlier blogs…and then suddenly it hit me. I was building this app to keep people connected. (Whilst I have summarised this in seven short sentences, it took me a few weeks to get to this final point !)

Knowing that I wanted to keep people connected, I had a new sense of vigour. And after countless hours of researching, back and forth eMailing and some very frank conversations, we finally came up with a solution that would work. The developers have been able to build an app that has gotten us further than before and now we are in the final stages of tweaking the Android version of the application…and this is very very exciting. In the last week, I’ve played with the Android version and even used it to successfully post a message on a friend’s wall. 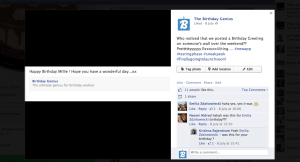 Birthday message posted on a friends wall…. via The Birthday Genius

So what’s next ? The Android version should be completed in about two weeks and the iOS version is being built in parallel and will also be ready for testing in a few weeks. This means that it is highly probable that we’ll be able to launch this within the next month. So now that it’s taking more than 9 weeks to build this app, maybe I should change the name of this blog to ‘how I built an app in 9 months’ ? (ed: Hang on, I’ve always called this project ‘my baby’ and now it looks like my pregnancy is almost full term.) 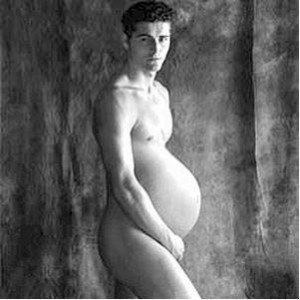 Being a project manager, of course I was always going to do a review of what I’d learned. Here are some of my ‘lessons learned’ over the past few months :

Before I go, a big thank you goes out to all of the people who I’ve talked to, to help turn this project around. Without your advice, guidance and support, this project would not have been as fun and enjoyable (and terrifying) as it has been. You all know who you are ! xx

Stay tuned for more developments, and next week I’ll even put up a few pics of the app !